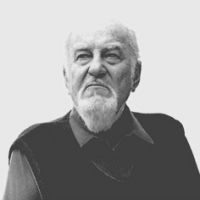 Mathieu Mategot was born in Hungary in 1910. After his studies at the school of fine arts and architecture in Budapest, he began to create sets for the National Theater. He settled in France in 1931, where he took up various professions, creating sets for the Folies Bergères, window dresser for the Lafayette Galleries, fashion desingner for dressmaking firms in Paris At the end of the 1930's, painting that he had continued doing, led him to a new world: tapestry work. The second world war interrupted his activity. A volunteer in french army, he was taken prisoner and he was free in 1944. After his return, he set up a workshop for handcrafted furniture in Paris. He used materials such as metal, rattan, glass, Formica, and perforated sheet metal in particular, to design chairs, armchairs, tables, serving tables, sideboards, desks and useful articles. His activity as designer spanned a relativity short period, up to the beginning of the 1960's. During this period, he created the three-legged chair "nagasaki" (1954) and the "copacabana" armchair (1955/1956) that are today part of the design collection at the Museum of Decoratives Arts in Paris and the design collection at the Georges Pompidou Centre, National Museum of Modern Art, Industrial centre, Beaubourg, Paris. These two pieces made in steel tube and perforated sheet metal, materials that were first used by Mathieu Matégot, are particulary representative of his work. During this decade, he also designed several decoration sites at Paris and overseas: Hotel de France at Conakry, Drugstrore Publicis, Paris, Maison de l'ORTF, Paris 1962. The Matégot's stand is present at all great events like "Salon des Artistes Décorateurs, SAD, Paris, or "Salon des Arts Ménagers", Paris. He was with Prouvé, Perriand, Royère, Adnet and the ceramist Georges Jouve in development of various projects, one of the most renowned french designer of this time. In early 60's, he deliberately stopped this activity to devote himself to tapestry work. His first cartoons were woven in Aubusson, France, in 1945. He worked with Jean Lurçat, Marcel Grommaire, Mario Prassinos and many others to modernize contemporary french tapestry. Many of his exhibitions got him recognition all over the world and particulary in Paris at La Demeure gallery. His tapestries can be seen in several places: at the Woolmark Head Office at London, the Bank of International Settlements at Basel, International Monetary Fund at Washington, National Library of Australia at Camberra, Rouen préfecture, France. Mathieu Matégot died in february 2001 in Angers, France. SOURCE: mathieu-mategot-furnitures.com
ΠΡΟΪΟΝΤΑ ΤΟΥ ΣΧΕΔΙΑΣΤΗ
ΑΓΑΠΗΜΕΝΑ
ΡΩΤΗΣΤΕ ΜΑΣ
ΑΓΟΡΑ