Karim Rashid (born September 18, 1960) is an industrial designer. He received a Bachelor in Industrial Design from Carleton University in Ottawa, Canada in 1982 and completed his postgraduate studies in Italy. Rashid has created over 2000 designs, including projects ranging from interiors, fashion, furniture, lighting, art and music to installations. Born in Cairo to Egyptian and English parents, and raised in Canada, Karim now resides in New York managing his private design studio. To date he has had some 2000 objects put into production and has successfully entered the realm of architecture and interiors, designing the Morimoto restaurant in Philadelphia and Semiramis hotel in Athens. His work is in the permanent collections of fourteen museums worldwide, including the Museum of Modern Art in New York and the San Francisco Museum of Modern Art, and he exhibits art in various galleries. Rashid was an associate Professor of Industrial Design for 10 years and is now a frequent guest lecturer at universities and conferences globally. Design Philosophy Rashid advocates a "democratic" design sensibility, suggesting that high-quality design should be accessible to the masses; both literally, in the sense that it should not limited to expensive, limited-run objects; and figuratively, in the sense that an aspect of good design is that it should be appealing to most people. He has designed objects for major brands, including Alessi, Georg Jensen, Umbra, Kenzo, Prada, Issey Miyake, and Method. He seeks to change the aesthetics of product design, and the nature of consumer culture.
DESIGNER'S PRODUCTS
WISHLIST
INQUIRY
SHOP NOW 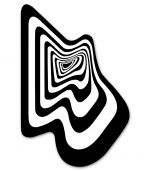